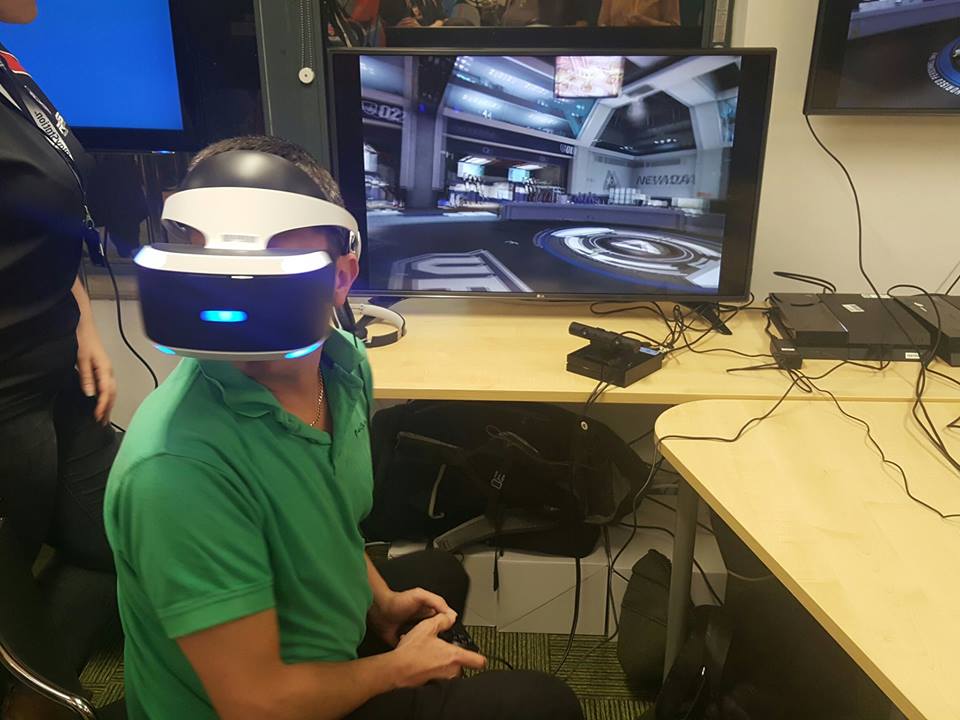 When Guerilla Games Studio put out the word that they would be showcasing their  PS4 game,   at Anglia Ruskin University, Lindsay cleared his diary and joined students, journalists, business owners and gamers at Campus House.

In the company of almost 200 people, he elbowed his way to the front of the queue to be among the first to play RIGS: Mechanized Combat League.

Which is odd, because he told us that it was a networking opportunity.

“The University runs a BSc in Computer Gaming Technology. It wants to lead the way in 3D asset building for virtual reality. That’s why it’s holding this event to make the most of potential commercial/university connections.” Lindsay on the importance of networking.

Apparently he would scout the event for potential students to  join our team. He said he could spot the glimmer of talented, interesting developers from across a crowded room…

As you can see in the photo above, he was just playing the darn game. (It pays to follow Anglia Ruskin University on Facebook, you know).

We couldn’t help but notice that on his return to the studio, DJ Lins was not clutching the names of any potential candidates for The Fusion Works. No siree, he was not. He had RSI and the glazed gaze of the true gamer that he is.

“It’s very gamey. It’s written exclusively for Sony VR and is really good for getting to grips with the techniques of gaming in a 3D arena. They’ve created a world of mechanised sports. It’s play, but in a vigorous, combative way. Some people said they felt a bit queasy, but I’m a VR pro-rider so I didn’t have a problem. If only it was available on PC.” Lindsay on RIGS

Fortunately, since Lindsay’s big day out, David has followed up on our recruitment drive with rather more success, but that’s another story…

To find out more about RIGS, go here.