Following on from Norfolk boy Lins’ day -1 diary, we checked in with him to find out how our Virtual Reality Game was being received and how Mobile World Congress is shaping up so far…

Comparing with last year, how was the reception from customers of the Gear VR?
They loved it, they are all saying how great it feels and easy to pick up and play. It is making for quite some competitive players. The first winner of day 1’s iPad has been announced and I think there are a lot of others who will be coming back tomorrow to have a crack at day 2’s prize.
Had most tried it before?
Some had been there and even the winner of last years game turned up and had a go. He was really trying to win again but came in the top 5 somewhere.
They seem to love it. Smiles all round. They say about how intuitive it is to pick up and play so that gives more time to get competitive.
Did they appear to understand AsiaInfo’s Veris Cloud Core message?

The majority did. They came off the game saying how the branding was everywhere. It was obvious it was an AsiaInfo custom game and they were repeating the BSS and messages printed on the tokens.
How did the AsiaInfo team manage with the Gear?
It went well. I stayed on the stand until about 11:00 and made sure they were good with it and knew how to switch phones when the battery runs down on one. The scoreboard all worked fine. Then at 11:00 I went for a wander. I had got right at the other end of the event when I was called back as there was an issue with the Samsung S6 Mobile starting the game; you would trigger it and it would say insert phone, but then it would trip out to the default Samsung app.
Rebooting the phone solved that though and then they were fine with it all afternoon. I then left for a few hours again and went back at half five for the last couple of hours and it seemed to get busier and busier. They drew a line at 18:00 and declared the days winner but we had people turning up who just wanted a go all the way up until 19:00. These were people who booked the space in the event and other digital marketers so I made sure to let them have a go and then gave them my card and said please let all the other stands know that TheFusionWorks did this and we do loads more that makes trade show stands shine : )  That all went down really well. 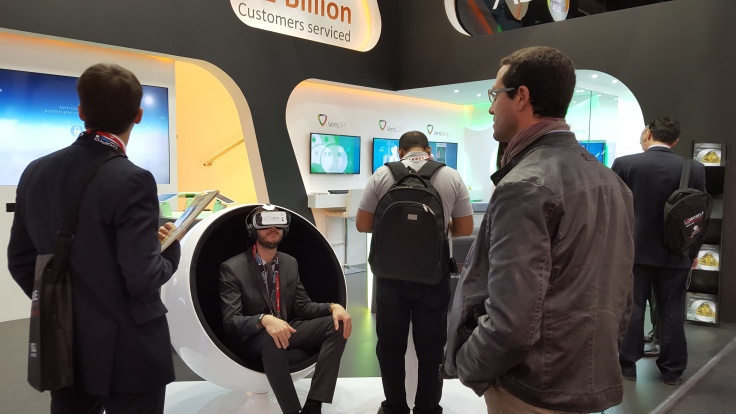 Were there any big announcements today at MWC?
Yep, the S7 was announced in the large auditorium here today. It looked just like the S6 so they were probably just saying “get that old one out of your pocket and we’ll say that is the new one” heheh.
Did you manage to speak with any reps from HTC?
I spoke to the HTC Vive guys about their announcement yesterday on the pricing of the Vive $800 and they were justifying the amount of controls and add ons you get with it. We will see about writing for that for next years show.
They have a demo where you walk about a 15 foot space and do some 3D painting. I was expecting something a little more exciting.
I made friends with a bloke on their stand while it was packed and there was an hours waiting list and he said later in the week if I pop over after 17:00 he’ll see about getting me a better / longer demo on it.
What was the craziest/ most exciting thing you saw?
Not much in the way of craziness. It is a geekfest heheh. There was a roller coaster with a full version double row of 20+ seats like the Alton Towers Oblivion where everyone was wearing Gear VRs, that was cool to watch they were all screaming like on the roller coaster. The seats moved and jolted too.
There was a yellow submarine where you put on Gear VRs and went on a sub diving mission. There is loads of cool VR stuff to see, including AsiaInfo stand of course!
Who did you speak to?
Some digital marketers, the stand builders, the people in charge of selling stand space. All people who are up for passing my card around and saying that they love what we do. Dan and JB from HTC Vive too.
Who has the best stand so far?
HTC Vive heheh although that isn’t the most impressive one. The roller coaster one is pretty cool.
How many freebies have you blagged so far?
Not a lot at the minute. A custom programmable NFC chip….and some sweets.  I have seen people with big bags of goodies so I’m not sure what has to be done to nab one of them but I’ll give it another go tomorrow.
Anything else caught your attention today?
The godsend of spotting that taxi this morning. The Metro strike meant that if I waited until everyone else was travelling in then I would probably not find a taxi so I got down to the lobby at 06:30 this morning. Almost an hour before I had to and got them to phone a taxi. They tried 3 times but no answer. They said my best bet is to go out front and try my chances at flagging one down but there was no traffic. Then after 5 mins of nothing a solitary taxi came pulling round the corner so I was waving at it like a mad waving thing and determined to make him pick me up.
Our client had booked a fleet of taxis and none of them turned up, it was just Claude and I on the stand until about half eight. Apparently the rich and famous were in a bidding war to promise taxis anything to cancel their bookings and pick them up, cheeky!
Also the head of AsiaInfo visited this afternoon. I think it all went well and he seemed to like it so all was good.
Aaanyways, that was day 1.